Using Variable Data for the Win at Trade Shows

Using Variable Data for the Win at Trade Shows

Your client is setting up for their next big trade show. You’re helping them with the banners, the signage, their business cards and brochures, and of course, their pocket folder. Pretty straight forward stuff.

Tradeshows are a serious investment for any company and the return on investment can be hard to quantify. There are challenges. How to get people to stop at the booth? How to turn that stop into a sale? Standing out and establishing a relationship are tricky prospects on a busy expo floor.

Tradeshow planning and marketing has 3 segments: Pre-show, during the show, and then follow-up.  Now is time to open your bag of tricks and use one of the most underutilized features of digital print technology: variable print. Every digital press manufacturer uses this technology as a “selling point” – but are you actually selling it?

Depending on the amount of data, you/your client receives in a pre-show registration list, you can set up postcard or email blasts in order to incentivize attendees to check out the exhibitor’s wares. Give folks a reason to stop at the booth – even if it’s just for something fun, like a carnival game or a selfie station. Just getting the exhibitor’s name and identity in front of the attendee before the show is a great tool to begin establishing name/logo recognition. If a mailing address is provided, sending a postcard that can be redeemed at the show for a special treat, sale, or prize is step one. At bigger shows, this note may be the crucial difference needed to get the attention of the attendees pre-planning their booth stops.

Would you believe this is where most exhibitors stop?

Help your client get creative with that pre-registration list for items to distribute at the show. For us, having a personalized folder for every person who walks by the booth has been a real “show stopper.” People never seem to get tired of seeing their name and frankly, many are surprised by it.

“How did you get my name on this folder?”

They are delighted and impressed. (And I’m dealing with printers!)

Variable print isn’t just about names, though. Say your client wants to color code folders for certain subsets of their industry, or maybe they want to do a tab folder with different entities, or job titles on the tab.

As you know, I love folders. I could (and do) talk folders all day, but that’s not the only great variable print idea out there. How about having individualized luggage tags at a travel conference? Or personalized candy boxes to match a carnival themed booth?

It is true, unless the booth is well “manned” and well organized, the trade show floor may be too chaotic to have individually personalized items available in the booth, but varied images, cities, colors…anything that an attendee can identify with, can be created. Executed correctly, the impact on the end customer is astronomical.

The traffic volume of a trade-show should never stop an exhibitor from adding customization at the most important “touch” – the follow up.

Exhibitor Magazine indicates that 98% of all exhibitors collect sales leads at a trade show. Whether it’s a business card, a notebook, or a lead system – this data is precious.

OK Kids. I mean it. When working with a client on their trade show plans, be sure to include the follow-up as part of the process. Exhibitors pay a lot, I mean a whole lot, to invest in the travel, exhibits, and expenses. The follow-up needs to be carefully considered and executed. Ideally, with correspondence that ties in with the theme chosen for their show and it should always be personalized.

As an example, our team had a lot of fun with variable follow-up from a recent ASI show. Step one was to take photos in the booth – people love their “selfies” these days. When we reached out after the show, each lead received a folder with their picture on it. The caption read: “We had a blast at ASI Chicago! But the best part was meeting you!” If there was no photo, then we inserted the person’s name. We enjoyed hearing back from people who were delighted to open their envelope and find their smiling face as a solidification of this new relationship.

Another customer of ours specializes in print for the real-estate industry. Each folder in his company’s follow-up had the name and photo of the agency he met.

Again, I sell folders, so these are my world, but variable ideas work on any digitally imprinted product. Variable can be in groups as well, maybe by city, “We loved meeting the Kansas City Team” then, “New York” and “Atlanta Team,” too.

The point is, the technology is here and relatively simple. How simple? Well if it’s a copy change that means we need the basic design, a font choice, and an excel list.  With pictures it’s a little fancier, but not bad. The set-up costs aren’t bad either.

When your client grows their business beyond belief this year due to that great event you helped them with, because of those little touches that make a big difference, and the expertise you brought to the table, everyone wins!

Want to know more about Ink Jet Digital Technology, check this out here: ADVANTAGES OF INKJET TECHNOLOGY (AND VIDEO) 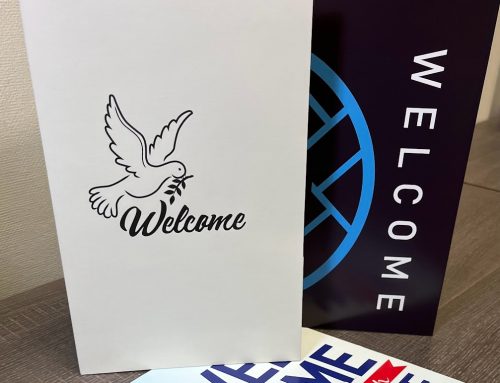 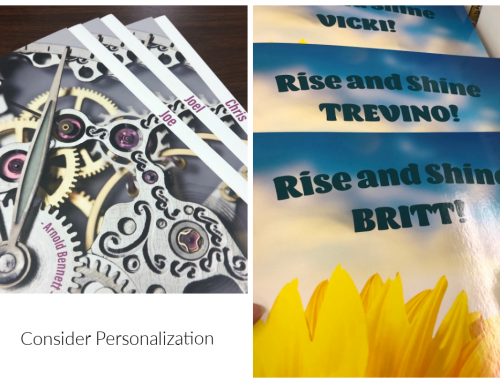 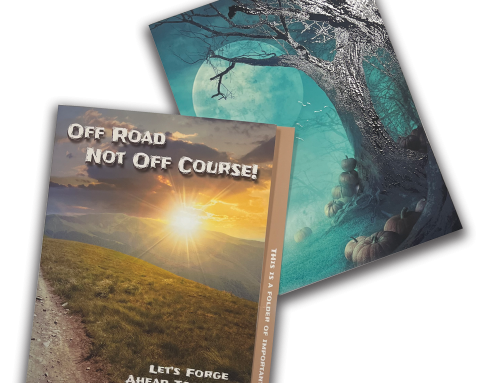